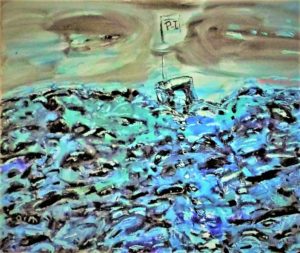 Of course the “Lift-off from the North Sea” painting by ‘aim’ is hugely symbolic and emphasises aim’s fundamental optimism. The arch-like structure of the post-iceterity block also suggests the double journey for the viewer. It should be added that the mechanical and yet natural mark-making of the fishy yet lava-like sea notates a participation in the critical dialogue of the 90s. As an advocate of the dilettante  aesthetic, I feel that the sublime beauty of the spatial relationships brings within the realm of discourse the eloquence of the post-iceterity block itself. The reductive quality of the Block’s apparent gesture spatially undermines the exploration of montage elements and hearkens back to the desperation of the original live block. The emblem of the ‘PI’ Flag ,just holding on, creates a fragile  overlap of sky and sea, both grafted onto a unified surface. Though the human figure is absent, there is a sense of eyes in the sky observing the Block’s gesture, perhaps even the Iceman’s, through the flat planes monumentally handled in a surprisingly painterly fashion. 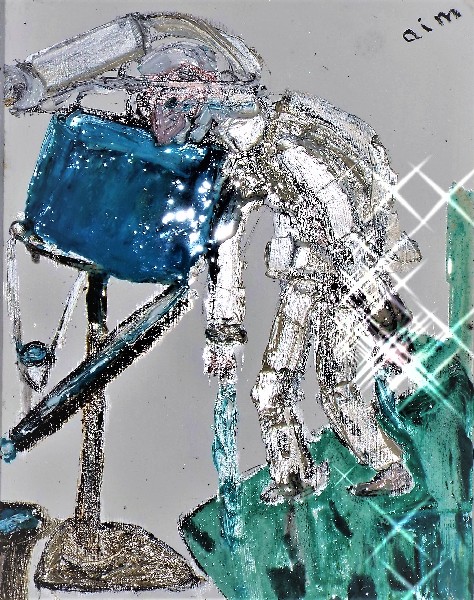